A week of ashram life 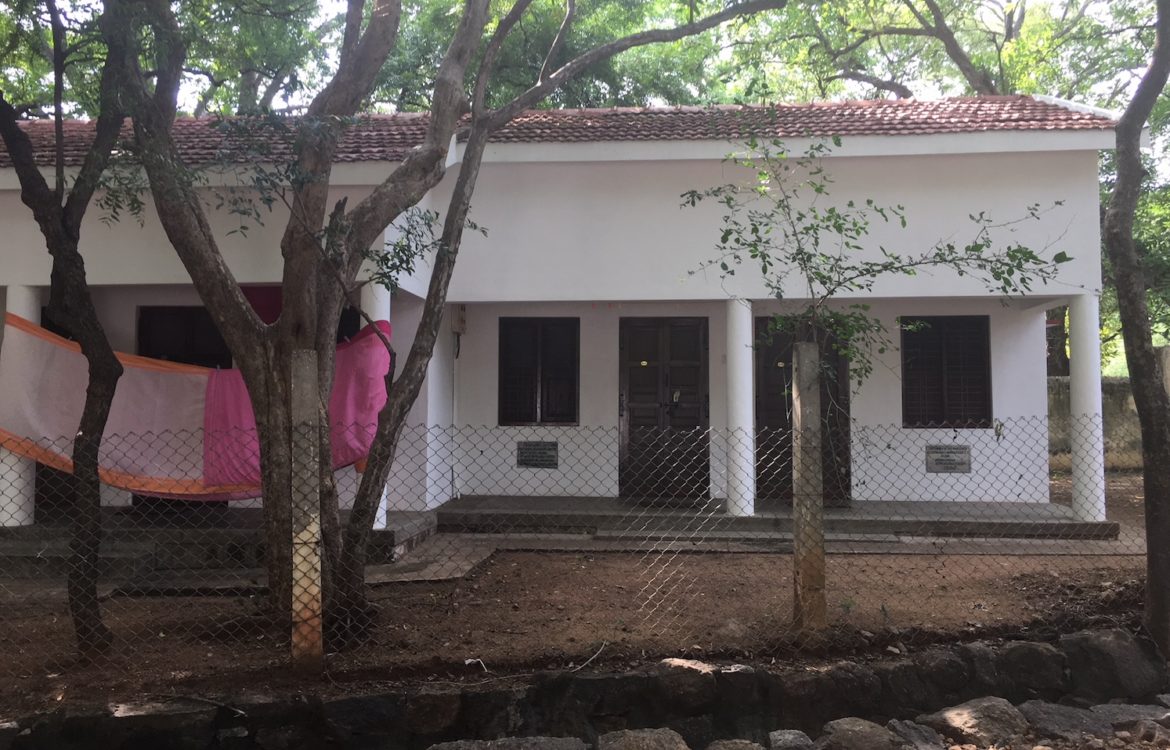 Ashram housing at Sri Ramanasramam. We were in the middle room.

Matthew and I have been staying at ashram housing since we arrived in Tiruvannamalai. It’s in high demand, and is by donation, so you can only stay a limited stretch; we’ve been allowed a week, which is pretty good, partly because we’ve also both volunteered to help with the website a little while we’re here. We’re given three meals a day (plus tea, of course). We have a little room, sparse and bare, with two fairly hard single beds and a small desk, in the most desirable section of ashram housing; private, closest to the mountain, furthest from the street. There is hot water, but no shower; you fill a bucket and wash from that with a smaller pail. The room stays quite cool in the heat of the day with a strong ceiling fan. It’s quiet – by Indian standards anyway, meaning the honking on the main road sounds fairly distant. There’s birds singing their hearts out in the morning. Occasionally, during the day, monkeys bound across the roof. At night, frogs are everywhere, and occasionally you hear a chk-chk-chk of a gecko somewhere on the ceiling.

Breakfast is at 7:00 AM, lunch at 11:30, tea at 4:00, and dinner at 7:30. Meals are quite the thing here. They start on time and it’s an astoundingly efficient assembly-line process. The floor is lined with banana leaves. You open up your leaf and rinse it with some water. Men travel quickly up and down the rows of diners with buckets, and each slops a ladleful of food onto your leaf: rice first, then a vegetable curry on top of the rice, sometimes a vegetable side dish. A dollop of spicy mango pickle, a drizzle of ghee. You eat with your right hand. They’ll come around with seconds of the rice and the curry, and if you want something or you don’t want it, you’ve got to be fast – block your plate with your hand or you’ll suddenly have an extra pile of rice, move too slowly out of the way and you’ll miss the sambal, fumble with your cup and you’ll end up with ghee in your water. At lunch, there’s dessert, which is usually in some kind of soupy liquid form; if your cup isn’t ready for it, they’ll just put it on your leaf, and you’re left trying to spoon up a sweet soup from a leaf with only your palm, which for me, as a sweet tooth, is a lesson in frustration. Once you’re done, you fold up your leaf, exit, and wash the rice off your hand. It’s super quick – and super tasty, too, which is surprising given how simple the food is. (Apparently one of the previous chefs got hired away by a four-star restaurant in Chennai – they ARE serious here.) It’s only mildly spicy; they don’t want anything too stimulating to the senses, as this is an ashram, after all. 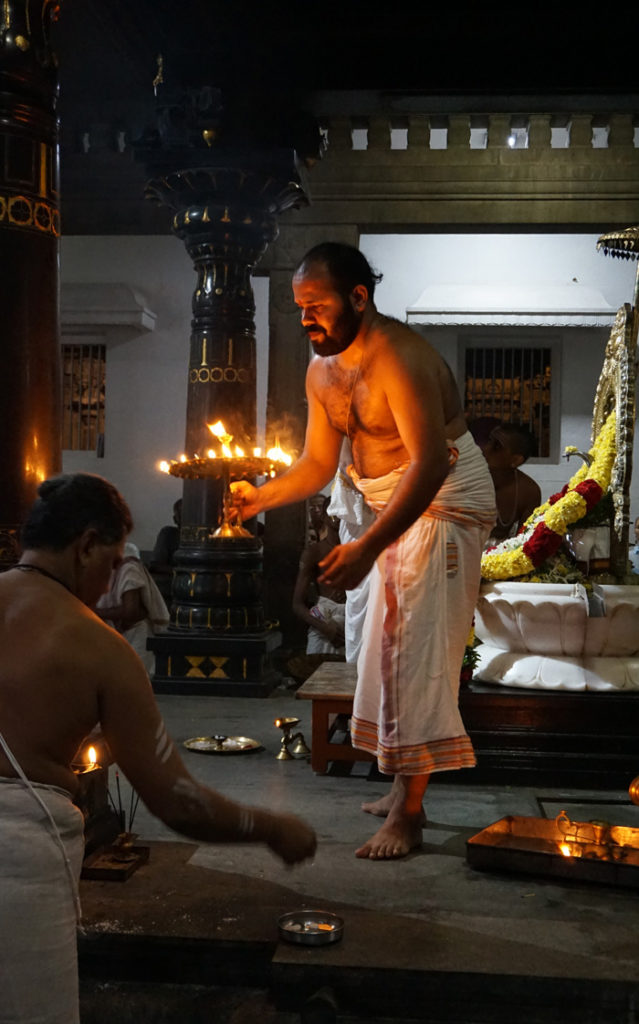 There’s a regular daily schedule around the ashram: vedas and puja at Sri Bhagavan’s Samadhi shrine and his mother’s shrine in the morning, readings in Tamil and English in the afternoon, more vedic chanting in the evening and another puja. Everything shuts from 12:30pm-2pm for lunch (famously, Ramana himself waited outside the gate until reopening upon learning that no one would be allowed in during that time – he didn’t like getting special treatment). Then there’s the singing of the Tamil Parayana in the evenings before dinner, which is usually the busiest of the daily events.

All of these things are optional. You come and go as you please, when you please. You can spend hours sitting silently in the meditation hall, or walk around and around the shrine, or park yourself in the New Hall and watch the flow of feet and fabric as people wander in and out. There’s a fantastic library with all sorts of resources if you need another perspective (or just a novel for a change of scene). There’s no meditation instruction, no teachers, just the readings. Nobody is going to tell you where you should be or what you should be doing or if you’re doing it right. It’s all between you and you. (Matthew wrote a blog post about this during our last visit.)

Why am I here?

This is a difficult question to answer. In January 2016, I came here with Matthew, mainly because he had been here multiple times before and loved it and wanted to come back. It took him quite a while to convince me to even consider going to India; I’d never had any interest before, and could only think of all the horrible things that were likely to happen to me there. And I didn’t want to go just because he wanted it; I wanted to find my own reasons. I read a bit about Ramana Maharshi, and appreciated his fairly open and relaxed approach to self-enquiry, but I wasn’t riveted or anything. Eventually I was curious enough about why this place meant so much to Matthew, and how it might affect my own exploration and meditation, that I was willing to give it a try. 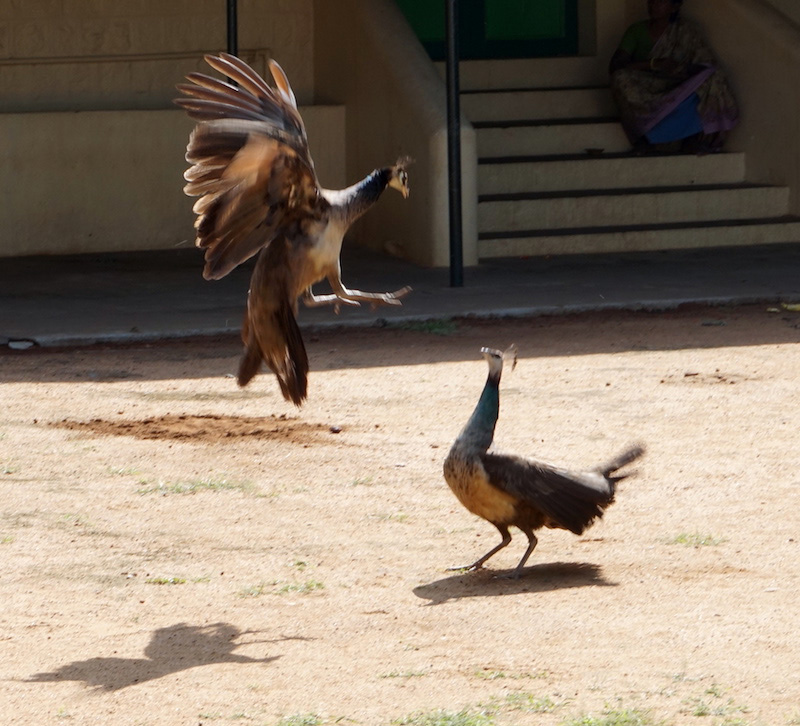 Adjusting to India was hard (as I expected) but I grew to love a lot of things about it, especially the feel of the ashram. And the two-and-a-half months definitely impacted me, in ways I’m not even sure how to describe. But coming back to Vancouver was as important a part of the process. I wanted to maintain some of the mindful pacing and priorities and simplicity of the life we’d had in India. I knew it would probably slip away from me after readjusting to the West again, and in some ways it did. But I also became more determined to keep up my meditation, learn more about what I’d experienced, and keep a part of me in touch with the feeling that I’d had at the ashram. I learned more about Ramana Maharshi after I came back than I had before or during my trip; I learned what they were chanting every day, what the songs were, stories about Bhagavan’s life; I read other teachers with the same advaita vedanta philosophy, and saw the same ideas phrased in different ways, some of which were easier for me to connect to.

Eventually I started to feel more that I needed to come back, that it was time to explore more here again. There is a feeling here that I’m not sure how to write about, that I’ve never experienced anywhere else. I’ve caught moments of it in Canada, when in a quiet and still place both physically and mentally, but here it feels more like it’s part of the environment. What words could I use? Presence, stillness, state of flow, openness? People here will ascribe it to various things: Shiva, the mountain, Ramana Maharshi’s presence (though these three things are all considered the same). I’m not going to try to define it. I’m hesitant even to acknowledge that I feel it because I know how easy it is to sound like a new-age nutbar (and there are some extreme cases of this to be found in Tiru). But yes… there is something about this place. 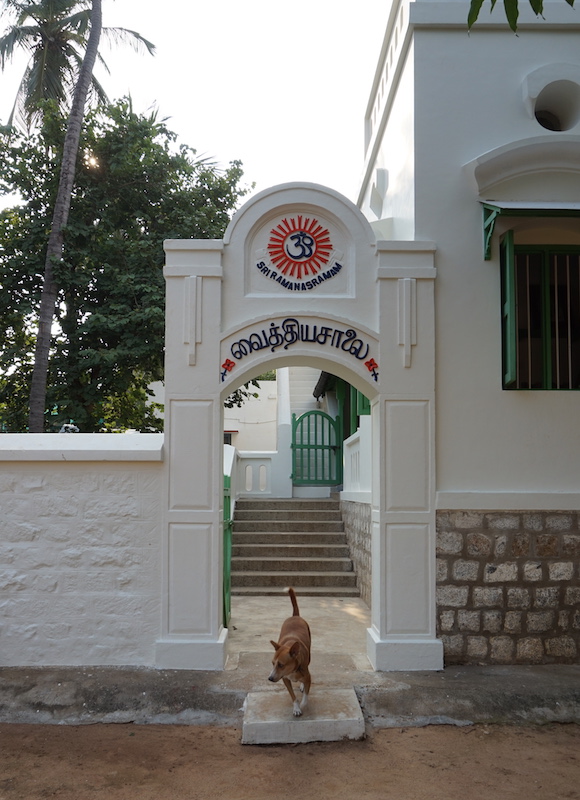 Tomorrow morning we’re moving in to an apartment about a five-minute walk from the Ashram. It’ll be nice to be so close – last time we were a scooter ride away, too far to walk. It looks like it’ll be reasonably quiet even though we’re close to town. It’s a newish building and fairly modern for Tiru. There’s construction sites immediately nearby, but since construction here is all manual and hardly any power tools, it’s not likely to be that disruptive. We’ll be crossing the busy, hectic main road to get to the ashram, and next week is the big Karthagai Deepam festival so it’s going to be crazier here than we’ve ever seen it. I’ll have to start working on my projects again, full-on deadline mode, so I’m trying to come to terms with that reality and letting myself think about work again without letting it take over my headspace. (I’m just hoping we have a desk and chair at the new place, as requested – you can’t count on these things in India…)

We’ll also have to fend for ourselves for food again, since we won’t have regular meals at the ashram any more. A few of our favourite places seem to have closed since we were here last, which means visiting some of our second-favourites and trying some new places. Our kitchen will be minimal and when good clean meals are $1-3 each, it hardly even makes sense to cook most of the time; I think of it more for quick breakfasts, and as a backup plan for when we’ve had some inevitable bad luck with food safety and just need to have safe, minimal white rice and yoghurt for a few days while recovering!

But although I’ll have to dive back into work and won’t have as much time to meditate and write, I’ll be here at the ashram at some point every day. We’ve made some friends here and it feels good to have the glimmerings of a sense of community. And when anything gets overwhelming, whether it’s a project deadline or the dizzying noise of Indian streets, it’s a relief to know that just down the street, there is a peace and stillness available, if you just take a bit of time to let it in.

From the moment you land – instant India

Back to the so-called real world: regular life in India

The nomad finds her parking spot